I think it’s quite funny that Rage Against The Machine’s 1992 swear-fest Killing in the Name is number one in the UK for christmas but the circumstances of it getting there are all a bit juvenile. Maybe that’s the point. 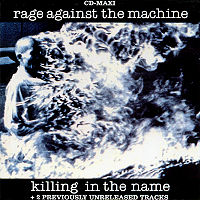 I’m sure some people will be hugely offended by the content of the song. There’s always someone just waiting to be offended at what they see as the erosion of the moral fabric of society. It’s all bullshit of course. Society is perhaps more moral now than it was, say, 100 years ago but there’s a generation that find open discussions of sexuality, violence, corruption etc. to be unsettling. They’d prefer it all swept under the carpet. However, “Killing in the Name” is not just random anarcho-punk. RATM aren’t Blink 182. It’s a serious song about police racism (particularly membership of the klan) in some states of the USA. It’s also about senseless wars initiated for corporate reasons by corrupt governments. In many respects Killing in the Name is a song about the Republican Party’s close relationship with the industrial-military complex in the US. The famous refrain with it’s 17 expletives is about questioning authority figures in whatever form they take.

It’s not the first protest song to become a Christmas hit. John Lennon’s “Happy XMAS (War is Over)” reached #4 in 1972 and #3 in 1980. I’m pretty sure it’s the first anti-war song to reach number 1 as a protest against the plastic pop of XFactor and other “idol” tv shows. The ShiteFactor crew outdid themselves this Christmas with sweetly plastic Joe McElderry covering a sickly sweet song from US plastic girl Miley Cyrus who pretends to be the super-fake Hannah Montana when told by her bosses as the plastic factory known as Disney. This is the least bio-degradable track of all time. How much frigging inauthenticity can they cram into one friggin song? I’m sure the folks from Guiness World Records were invited to the recording session.

Every time R puts on X-Factor I think of Bill Hicks advertising sketch. Looked at objectively much of these competitions consist of cruel exploitation of delusional/mentally-disturbed people for the purposes of entertainment. Still, we’ve advanced in the morality stakes by not actually feeding them to lions afterwards.

I’m hopeful that when people buy the RATM single they’ll listen to all the lyrics and not just the “fuck you, I won’t do what you tell me” refrain and realise that in the true spirit of anarchy they can apply this not just to crafty Simon Cowell but also to the government, banks, religions, secular religions (ya know what I mean), the EU and all manufacturers of dairy produce. It’s metaphorical ya see 🙂 It’s a song about standing up to injustice and hypocrites.

If this happens then I frankly couldn’t give a damn how much money Sony make out of this. Although it bothers Brian Boyd in the Irish Times for some reason I’m not entirely clear about even having read this article. Amusingly enough the quaintly insular Irish Times describe RATM as “little known American punk metal band” in today’s paper. They’ve since edited this from the online version so someone must have explained to them that RATM are better known than the Irish Times itself.