In my last post I mentioned problems with PWM-dimmed monitors as an aside but that’s not an accurate reflection of the negative effects I think PWM can have on some people.

Pulse Width Modulation dimming involves varying the frequency of the LED backlight pulse to give the impression that the monitor is less bright. TFT central explain the technique here

“at 100% brightness a constant voltage is applied to the backlight and it is continuously lit. As you lower the brightness control the perceived luminance for the user reduces due to a number of possible controlling factors:

1) The backlight is cycled on and off very rapidly, and this cycling typically occurs at a fixed frequency (in Hz). How fast this cycling occurs can impact whether flicker is visible or perceivable to the user, with higher frequencies being potentially less problematic.

2) The modulation of the cycling has an impact on the perceived brightness, and this describes the difference between the luminance in an “on” and in an “off” state. In some examples the backlight is completely turned off during the cycle so it is literally being turned on/off rapidly across the full brightness adjustment range. In those examples the luminance output is controlled really by the duty cycle only (see point 3). In other examples the backlight is not always being completely turned off but rather the voltage applied to the backlight is being rapidly alternated, resulting in less extreme differences between the on and off states. Often this modulation will be narrow in the high brightness range of the display, but as you reduce further, the modulation becomes wider until it reaches a point where the backlight is being switched completely off. From there, the change in the duty cycle (point 3) controls the further changes in the luminance output. 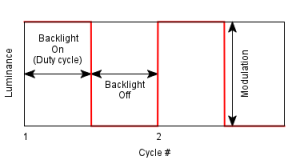 The attractions to manufacturers is that PWM is easy to implement given the ability to rapidly cycle LED lights. The side effects are a push towards the blue spectrum and a harsh on/off wave due to the greater responsiveness of LED’s versus CCFL’s which momentarily maintain residual brightness after the power is cycled. The CCFL “glow” lessens the flicker effect .

To be very direct about this, I first started noticing PWM effects when I got my first LED monitors but I had no idea what they were. I was an early adopter and wanted the latest and greatest thing. Over the past few months my ophthalmologist has identified a possible reason for the problem which he had operated on unsuccessfully to correct. I have an indistinct foveal pit in one eye which means that I may be more sensitive to flicker from screens, particularly when the colours are biased towards the blue end of the spectrum. Simply put, there’s less of a distinct target on my retina to focus on and blue light is more likely to give a glare effect.

Just to convince myself I’m not going mad (or it’s a shared delusion) there are other Apple Mac users with a similar problem in this thread.  I have subjectively confirmed myself and see it confirmed on product websites that the latest Apple MacBook Pro Retina’s do not use PWM dimming and are “flicker free” in that respect.

So what do I see from my left eye that’s so distracting. Well, it’s this.

The flicker prevents the eye from focussing on text when trying to read.  Over a long day the user becomes very tired and inattentive.

I think you get the idea how irritating and tiring this would be over a day of coding and others on the Apple list find the same problem. I suspect that many people who claim to or are diagnosed as suffering from “Computer Vision Syndrome” are really suffering the effects of PWM-dimming and the blue-light bias of most LED displays (and office lighting unfortunately).  The proposed remedies include glasses and screens which block some blue light using brown or amber tints. I would suggest reviewing whether your monitor uses PWM dimming using the database here.

BenQ have a range of monitors which both reduce the blue light bias of LED’s and use DC instead of PWM-dimming under their EyeCare range. I tried their 24″ gaming monitor and found it lessened eye strain and ghosting dramatically. There are other alternatives but some Mac users have complained of other problems with Apple computer displays that are probably not related to PWM. See comments re. “temporal dithering”. And further complaints about issues when using Apple displays here. It would be really nice if Apple could find it in their hearts to look into this as they’re selling premium-price products that some users are having very bad reactions to.

The problem does not occur, at all, for me when using an Android Nexus 7 tablet. (2013 version)

If you’re suffering from fatigue and notice that your monitor gives you eye strain it could be worth looking at flicker free technology.